When I grow up, I want to be a YouTuber

In 2019, the LEGO Group (yes, that LEGO) conducted a survey in the US, the UK, and China as part of a celebration of the 50th anniversary of the Apollo moon landings in an effort to understand how many kids aspire to be an astronaut when they grew up.

The study found that 11% want to be astronauts when they grow up. But nearly three times as many of those same kids — 29% — said they aspire to become a YouTuber.

What does this say about culture? Becoming an astronaut certainly isn’t easy, nor is it widely attainable. But the idea of being an astronaut has traditionally held a certain reverence for kids, representing an ideal of understanding science and engineering.

Right now there are only 44 active astronauts serving for NASA. I counted.

There’s definitely more than 44 people making a living on YouTube. But how many are there, exactly?

We can’t tell exactly, but we can do some napkin math. Let’s be generous and say one million subscribers is the minimum needed to make a career on the platform (lots of people have made serious money with far fewer, but we’re being generous). Jacob Bates has a great post on Medium with a brilliant method for reverse engineering how many YouTube accounts have over a million subscribers (as of early 2021).

He picked one that was recent, then he checked the account’s rank on SocialBlade — showing over 23,000 YouTube accounts with more subscribers than his test channel — which Bates points out makes it safe to assume there are at least 23,000 accounts on YT with 1 million plus subscribers. Again, being generous, let’s cut out a little more than 50% of those to account for brands, media companies, etc. and assume there are 11,000 creators making a successful, six-figure plus salary on YouTube.

It makes sense. The fame, the wealth, the feeling of attainability (“I could do that”) that has become associated with being a creator — especially on YouTube — has transformed a joke into the most desirable new career for children.

For context: there are about 1.4 million accountants, 3.5 million truck drivers, 9.8 million healthcare workers, and 654,000 police officers.

The concept of being a creator is given some credence when viewed through the lens of Li Jin’s passion economy: digital platforms are enabling “people to earn a livelihood in a way that highlights their individuality.” It’s clear that this happens on paid subscriptions platforms like Substack, Patreon, and yes, OnlyFans. Not everyone has to be a millionaire; making a six-figure salary still lends to a very nice lifestyle in most places.

But is the passion economy ideal actually happening on YouTube, or are people seeing MrBeast’s crazy stunts and simply trying to copy them? Do his viewers understand what Jimmy’s true goals actually are? Are they taking inspiration or are they imitating?

Do the kids who want to be a YouTuber actually understand what it takes to run a successful channel on YouTube?

To answer these questions, we need to understand the true extent of MrBeast’s YouTube empire.

The most popular YouTuber

Meet MrBeast. You’ve probably heard of him already: his videos have been watched billions of times.

He’s the world’s fastest growing YouTuber in the world, pushing up on 100 million subscribers on his main channel.

Despite being only 23-years old, Jimmy “MrBeast” Donaldson has accomplished feats that are only rivaled by major production studios. His recreation of Netflix’s Squid Games (230mm views) has more views than Netflix does subscribers (221mm). He’s turned his operation from a one-man show into one of the most prolific and high-quality production studios in the country. And his content is all free!

In a recent interview with Joe Rogan, Jimmy covers how he started on YouTube, how he got to where he is today, and how he thinks about growth now that he’s the fastest growing creator in the world.

The two-and-a-half hour conversation covers a lot of ground, much of it related to YouTube and how Jimmy has built up such a large network of subscribers. If you don’t want to listen to the whole conversation, this is a great clip.

He spent that time doing things that no one else would do — and it turns out people will watch that just for the pure absurdity of it all.

As Jimmy grew, he didn’t take any money from outside investors. He never gave away any ownership of his company. He just did one thing: continually reinvest the profits from previous videos into the next one. This enabled him to be entirely self-started.

At all stages of his career, MrBeast never allowed new money to get in the way of making better content. Instead of buying a Rolex, the first time Jimmy got a major brand sponsorship, he took all of the money... and gave it away to a homeless person. The video has 9.9 million views. And he didn't stop there.

As his attention-grabbing videos got more and more views, he was able to get more money for brand deals, which he then reinvested right into making his next video bigger and better. This continual reinvestment strategy allowed Jimmy to create a virtuous cycle that increasingly grows his production budget — and results — with each new video.

Jimmy is a master of avoiding lifestyle creep. From Investopedia:

MrBeast has continued to invest in YouTube beyond his original channel. In the last few years he’s developed a network covering topics including gaming, reactions to other YouTube videos, and philanthropy.

If that wasn’t enough, Jimmy has also been translating his videos into other languages to reach a wider, global audience. As he mentions in the Rogan interview, less than 10% of the world speaks English, so 90% of the world can’t understand his content unless he translates it.

These channels publish the exact same content as Beast’s English channels, just dubbed into the native language. He even has celebrities voicing him in some languages — he told Rogan that the voice actor he uses for his Spanish channel also does the Spanish dubs for Spider-Man.

Jimmy has utilized a strategy usually reserved for global media companies to reach hundreds of millions of people who would never have otherwise seen his content. While his main channel is yet to reach 100 million subscribers, Jimmy has well over 200 million subscribers when you count all of his different channels.

The intersection of desire and attainability

From the viewer’s perspective, life as a creator looks like all fun and games. We see an edited, highly-curated version of that person’s life experiences in a way that makes it feel as if we’re friends despite never having met.

But even assuming there are 11,000 people making a successful living on YouTube, that’s still a pretty high bar. It’s not as high as the NBA or being an astronaut, sure, but there are 330 million people in the US, about 25% of them under 18. That’s 82,500 aspiring YouTubers. Again, being generous, if 11,000 of them find success, that's 13.3% — leaving another 16% who wash out to do what, exactly? YouTube growth is not as easy as it used to be, and it’s hard to imagine it getting any easier any time soon.

This small percentage of people creates content that gets consumed by the majority, so it only makes sense that there is a natural filter preventing everyone from having an audience.

The impact of MrBeast

Jimmy’s unequivocal status as the most popular YouTuber has left a huge impact on the platform as a whole — and every new video he publishes continues to influence the broader trends and goals of other creators on the platform.

MrBeast has clearly inspired popular creators like Airrack and Ryan Trahan, among many others. YouTube creators who have developed a brand doing other things have started to give away free cars, crazy amounts of money, and insane jewelry. One can only hope this will inspire a wave of philanthropy in the next generation of kids.

Jimmy has been a positive force, even if the videos he makes border on the dystopian or torturous. He is clearly someone with lots of depth and who goes out of his way to spread a positive message — especially relative to other popular creators who rely on pranks and teasing to keep their content interesting.

I’m not basing that opinion exclusively on this Rogan interview, either: Jimmy has demonstrated the same kindness, work ethic, and wisdom beyond his years in multiple interviews with Colin and Samir, a conversation with MKBHD, and on the Impaulsive podcast.

While it might seem easy on the outside, behind the scenes there’s a tremendous amount of work.

It’s not easy to build a brand on YouTube — Jimmy has clearly dedicated his life to it. I hope that anyone who aspires to be like MrBeast realizes the sheer amount of dedication and hard work that’s necessary to accomplish even half of what he’s done.

MrBeast’s Twitter bio says it all: “I want to make the world a better place before I die.”

Ideas, experiences, and things that are worth your time.

One email per month. View the archives.

The billionaire investor says that the rise and declines of the world’s most powerful nation follows a predictable “Big Cycle” pattern. 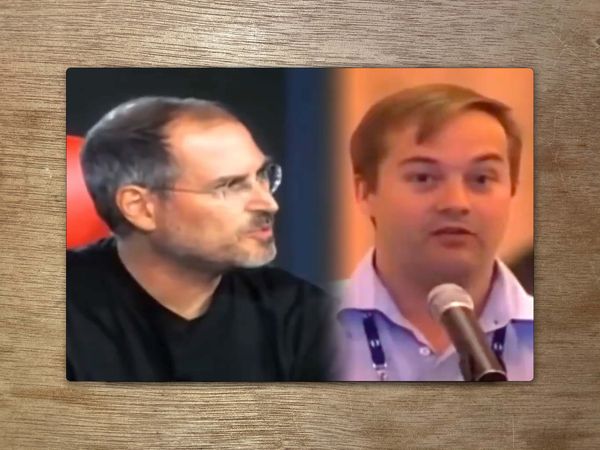 Jason Calacanis shared this throwback to an incredible Q+A with Steve Jobs.